Welcome to Ninja Magic > Rapid Prototyping > How it works

A 3D model is first created (modeled is the proper term) in a computer using a 3D software package. This page won't go into the intricacies and techniques of modeling but suffice it to say, this model will eventually be saved in a rapid prototyping friendly format - usually the .stl (Sterolithography) format though Ninja Magic can accept other formats.

Ninja Magic then takes this model and runs it through another software package that slices it into very thin layers and saves that information in a specialized format. There are many rapid prototyping technologies that have been developed, but nearly all of them build a 3-D model one layer at a time in some manner. How they do this varies from machine to machine but Ninja Magic's works much like an inkjet printer.

The prototyping machine prints these layers onto a surface called a "build plate," and two jets shoot molten material onto it to create a layer. One jet prints the actual material the finished model will be made of (blue), and the other jet prints a support structure (pink), much like scaffolding, to hold everything in place as it builds the model.

After the machine prints a layer, the layer cools and hardens, but the nature of the layer being printed with jets of molten material means the top surface of the layer is rather lumpy. So, after each layer is printed, a cutter then shaves the layer down to the desired thickness, while at the same time making the layer flat - preparing it for the next layer that will go on top.

This process is repeated until every layer of the model is fully printed. The model is now stuck to the build plate and needs to be removed. 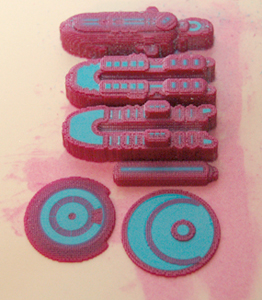 Parts finished printing, but still on the build plate

The build plate is pulled out of the machine and placed on a hotplate where it is heated from below. This gradually melts the base support layers and allows the parts to be removed. The build plate is then cleaned of any residual material and is ready for use again.

The finished part is then pulled out of the bath and dried.